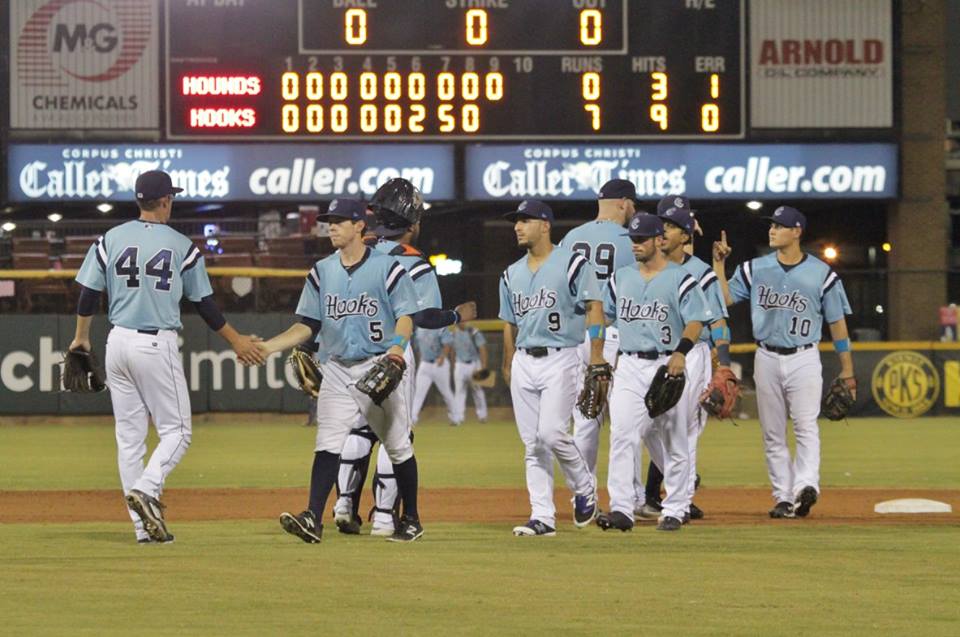 Since Luhnow has taken over as the Astros General Manager the Corpus Christi Hooks have consistently fielded a very good and competitive team. This season was no different as the Hooks started out the season as one of the most talented teams in all of baseball. The Hooks struggled a bit in April but really turned it on in May finishing the month with a 21-8 record.

The Hooks finished the first half with a 47-23 record winning the first half title by a whopping 8.5 games. This team at one point fielded Alex Bregman, Teoscar Hernandez, and Joseph Musgrove, who are all with the Astros now. Derek Fisher, Brendan McCurry, Keegan Yuhl, and David Paulino were all promoted and playing with AAA Fresno Grizzlies. There is no doubt the Hooks lost a lot of talent over the summer. Unfortunately it showed on the field with a 12-18 record in the month of July.

Just as prospects were promoted to Fresno and Houston, Corpus slowly started getting some talent from Lancaster. These newcomers helped the Hooks to a 17-8 record in August prepping them for a playoff run. Here are some of the prospects that have been promoted to Corpus over the last month and a half.

Laureano was an unknown prospect to most coming into the season. Drafted out of community college in 2014, he had a subpar showing that season with the Astros. He put together a solid season in 2015 but still left some to be desired. In 2016 he has broke out in a big way. After hitting .317 with 10 HR, 33 SB in 80 games for Lancaster he was promoted to Corpus where he has hit .318 with a .991 OPS in 31 AA games. Click here for more info on Laureano.

Stubbs was drafted by the Astros in the 8th round of the 2015 draft. Coming out of the draft he was seen as a glove first catcher but the bat was a question. Stubbs has answered any questions about his bat this year hitting .291 with 13 2B, 6 HR in 55 games for Lancaster. He was promoted to Corpus and is currently hitting .315 with 4 HR in 29 AA games.

Just like Laureano, Armenteros was a bit of an unknown prior to this season. Signed by the Astros out of Cuba for just $40,000, the right hander had a solid showing last season. At 22 years old he started the season with Quad Cities where he had a 1.93 ERA with 20 K in 18.2 innings. He was promoted to Lancaster where he posted a 4.18 ERA with 107 K in 90.1 innings. In two starts with Corpus he is 2-0 with a 0.69 ERA. For some more information on Armenteros click here.

Deetz was one of my selections for breakout prospect this season, along with Laureano, and he has pitched well. While it hasn’t been a huge breakout, he held his own in a very tough league to pitch in posting a 4.24 ERA with 86 K in 93.1 innings in Lancaster. He made his AA debut just a few nights ago and was electric. He tossed six shutout innings striking out nine batters.

They have also added outfielders Drew Ferguson and Bobby Boyd who both have already provided a boost. With these additions the Hooks have reclaimed their first half form and are ready to make a push in the playoffs looking to win their first Texas League Championship since 2006. While they have lost a ton of talent, the Astros farm just keeps on restocking their minor league teams.