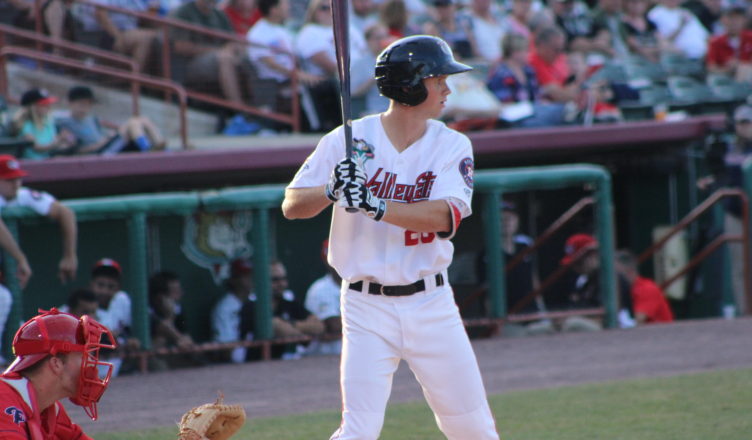 The Tri-City ValleyCats opened the month of July in winning fashion winning the first series of the month.  Here is a look at the top performers in their series against the McNamara Division’s Hudson Valley Renegades (Rays).

After a tough series loss to the Willamsport Crosscutters, the Tri-City ValleyCats drew on the momentum from that series finale into the first game of the three game set against the Hudson Valley Renegades.  The ‘Cats weren’t going to let the threat of tornadoes in upstate New York stop them from jumping out to an early 2-0 lead.  Daz Cameron would put Tri-City’s first run on the board, scoring on a wild pitch from Hudson Valley’s Brock Burke after getting to third on the strength of a Ronnie Dawson single.  The Renegades would claw their way back into the game in the bottom of the seventh getting the score to 4-3, but that would be as close as they would get.  An RBI single by Stephen Wrenn would add an insurance run giving Tri-City a 5-3 win in the series opener.

Edgardo Sandoval started game two for the ‘Cats and did a decent job allowing just one run on four hits in three innings of work.  Tri-City’s manager Lamarr Rogers would hand the ball off to Ben Smith in the fourth inning which proved to be too costly.  Smith lasted just 2/3 of an inning giving up four runs which put the game out of reach for the ValleyCats.  Wrenn would come through again in the eighth inning with an RBI single bringing the score to 5-1, but that’s where it would stay.

The ValleyCats would come out and make a statement in the series finale.  After struggling to score on Saturday, Tri-City would make up for it on Sunday.  They pushed across 10 runs on 14 hits falling just a triple away from a team cycle.  What was equally impressive to the offensive onslaught, had to be the pitching performance of Hector Perez and Enrique Chavez.  The duo would allow just four hits and a walk, while combining for eight strike outs.  Perez has dominated in his four appearances so far for the ValleyCats.  He holds a 2-0 record, with an ERA of 0.52.  In his 17.1 innings of work, he has allowed just one run on eight hits while tallying 20 strike outs.

As for the offense Sunday, they would combine for fourteen hits including five doubles and three home runs.  Once again it would be Stephen Wrenn leading the charge but followed closely this time by Daz Cameron.  It was a total team effort on Sunday which is hopefully a sign of things to come.

The ValleyCats return to “The Joe” for a brief three-game set against the State College Spikes on Monday.