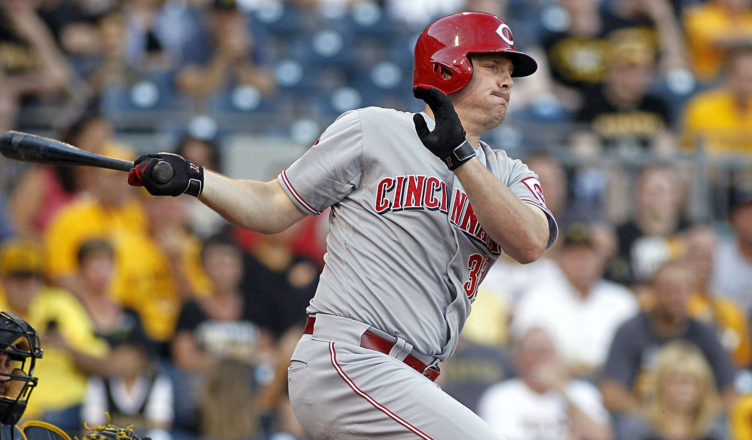 Should The Astros Trade For Jay Bruce?

The Astros are currently 54-46 and while they have lost two games in a row, they have been one of the best teams in baseball since May 24th. With that said, almost every team can upgrade and it is possible the Astros look to upgrade in the outfield. One potential target could be the Cincinnati Reds outfielder, Jay Bruce. It seems like every season Bruce is rumored to the Astros but, once again, the Astros have a need for him.

Right now the Astros current outfield is Colby Rasmus in left, Carlos Gomez in center, and George Springer in right. Coming into the season many hoped/thought that this had the potential to be one of the best outfields in all of baseball. While Springer has done his part, the Astros haven’t gotten consistent production out of left field and center field.

First we will start with center field. Not to beat a dead horse, but Gomez has not been productive since coming to Houston. In 119 games with the Astros, Gomez is hitting .223 with only 9 HR, 41 RBI and 125 strikeouts. He had a decent June and it looked like he might break out but he has reverted back in July and is hitting .178 this month. Also, the Astros are dead last in wRC+ and WAR at the center field position. I like Gomez as a person and love the intensity he plays with but the Astros need better production from center field.

In the off-season Rasmus became the first player to ever accept the 1 year qualifying offer. During the month of April in which he hit .263 with 7 HR, 19 RBI, it looked like a good deal for the Astros. Unfortunately since April, Rasmus has just 4 HR and is hitting .051 this month (2-for-39). Yulieski Gurriel has been signed and it looks like he may see some time in left field. Alex Bregman is also getting reps in left field and is likely to play some there.

So with some in house replacements for left field, the Astros still need to find help for center field. This is where Jay Bruce comes in. He isn’t a center field but the Astros can easily slide Springer over to CF (his natural position) and play Bruce in right field. Surprisingly, Bruce has been rated poorly in right field by the advanced metrics but this article here explains why he might be better than the metrics are giving him credit for.

But we all know Bruce wouldn’t be brought in for his defense. Bruce has a couple down seasons the last two years (82, 98 OPS+ respectively) but has found his stroke again this season. He has been a pretty consistent performer in his career topping 20 HR and 70 RBI 6 of the last 7 seasons. In 93 games for the Reds this year he is hitting .272 with 22 2B, 23 HR, 77 RBI, 129 wRC+ and is posting a career low strikeout rate. Putting this production in right field and moving Springer to center would immediately give the Astros an offensive upgrade. Bruce can also DH at times and let Marisnick help in the outfield.

Now I’m sure some people wonder why Bruce? The 23 HR, 77 RBI would lead the Astros in both categories and his 129 wRC+ would be second on team to Jose Altuve. One of the most appealing parts of potentially acquiring Bruce is he has a team option for $13 million next season. At this pace, $13 million for Bruce next season would be a steal. I would prefer the Astros not trade for a rental and Bruce does not fall into that category. With his play this season he has certainly raised his stock and won’t come cheap in terms of prospects, but as we have seen in the last year, Luhnow isn’t afraid to deal prospects for major leagues (Kazmir, Gomez, Fiers, Giles). Also I will add, this would be a homecoming of sorts as Bruce attended high school in Beaumont, TX just minutes from Houston.

The Astros do a great job of keeping trade rumors in house so at this time it is unclear if the Astros are potentially in on Bruce or even looking for offensive upgrades at all. What we do know is Bruce will provide another left handed power bat in the middle of the lineup and will have the change to contribute not only in 2016, but in 2017 as well. If they were to acquire him, something would happen with Gomez and Rasmus but I won’t speculate as to what. Do you think the Astros should acquire Jay Bruce to play right field?