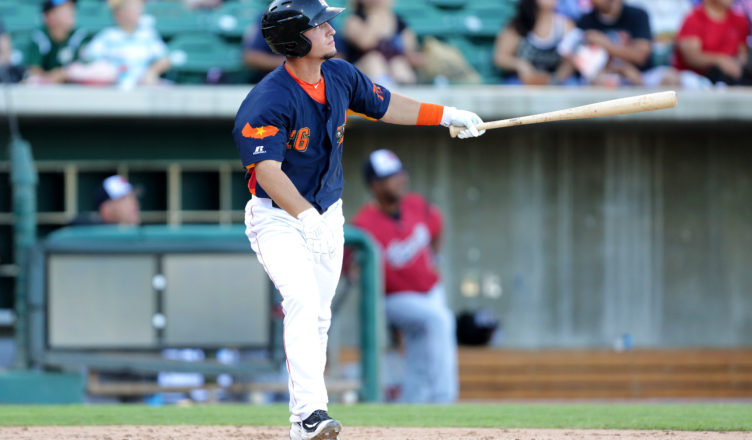 Alex Bregman Called Up By The Houston Astros

The Astros have recently seen a sliver of players in AAA play well enough to earn their chance to show what they can do at baseball’s highest level. With recent prospects earning promotions to the club such as Colin Moran, Tony Kemp, Chris Devenski, and AJ Reed, the Astros have seen some big name prospects earn time in Houston with their performances in AAA. But arguably none have preformed as well as 2015 #2 overall pick, Alex Bregman, who has been called up from AAA Fresno.

Bregman is a very athletic player, allowing the Astros to get creative when it comes to deciding on a position for him. He played C and SS in College, and looks to slide over to 3B or even LF in the Majors due to being blocked by Carlos Correa at SS.

Bregman has the ability to hit .300 at the next level and 20-25 HRs at the next level. He doesn’t strike out a lot and while he’s not a speed demon, he can still surprise on the base paths, having stolen 38 bases his Junior year at LSU. He’s more than solid in the field with an above-average arm that should make his move to 3B or LF an easy one, and is one of the hardest workers you can find, so you can expect him to work his way out of his slumps. He’s drawn comparisons to Red Sox’s Dustin Pedroia, as both are athletic infielders that are very skillful at the plate.

Bregman added to the Astros’ lineup gives Houston yet another impactful bat at the top of what is already a very threatening lineup. He’ll most likely slide into the #2 hole and see some quality pitches with Jose Altuve batting behind him.

Since being drafted, Bregman has been a abnormally quick riser in the Minor Leagues, going from A-Ball to AAA in only 146 games. The Astros’ fans are very excited to have him on board, and the expectations with Bregman are high. Congratulations to Alex Bregman on his Call-Up to the Houston Astros!