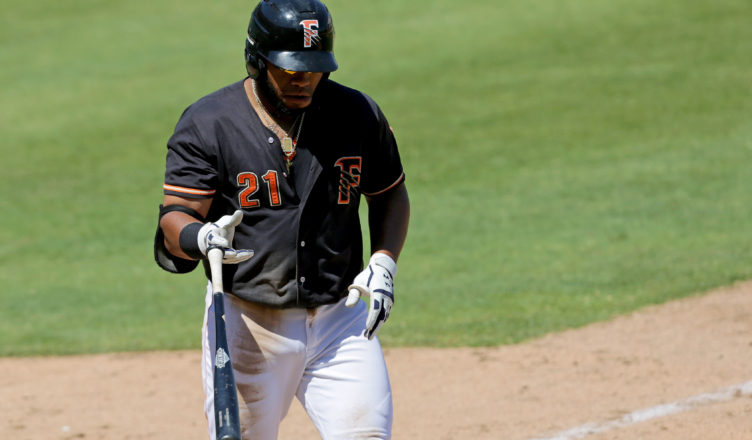 Does Jon Singleton Deserve Another Chance?

Going into the 2013 MLB season, the Astros major league roster was quite bare, but the talent in the minor leagues was starting to accumulate. The Astros had one of the best prospects in baseball and a guy many people thought was a guarantee to hit at the big league level. His name is Jon Singleton.

The Astros acquired Singleton in the trade that sent Hunter Pence to the Phillies in the summer of 2011. Singleton spend the entire 2012 season in AA with the Hooks at age 20. In that season he hit .284 with 27 2B, 21 HR, 79 RBI in 131 games. This lead many evaluators to rank him as the best first base prospect in all of baseball.

In the summer of 2014, Singleton was called up and made his major league debut. He homered in his first game but struggled the rest of the way hitting just .168 with 13 HR in 95 games. He also posted a 13.8% walk rate and 37.0% strikeout rate. Singleton started off the 2015 season in AAA and played in 70 games before getting recalled. In those games he made some improvements cutting down on his strikeouts and hitter for a better average.

Singleton only played in 19 games in 2015 and hit .191 with 1 HR in 19 games (58 at bats). He did show some improvements though with a 17.2% walk rate and a 29.3% strikeout rate. This spring Singleton had a chance to make the opening day roster but Tyler White put together a great spring and won the first base job. Though White started out hot, he has slowed down a bit and it now flirting with the Mendoza line.

Just a quick look at Singleton’s stat line in AAA, with a .215 BA, and one would think he doesn’t deserve another chance. But looking deeper into it, it’s very possible he could provide the Astros some production at first base. His walk rate is up a bit from last season in AAA (14.6%) and the strikeout rate about the same (22.1% to 22.6%). His batting average is obviously low at .215 but his BABIP is crazy low at .213. For comparison his BABIP his last two seasons in AAA was .292 and .282. If his BABIP normalizes he would have a lot better average. He is still driving in runs too with 14 HR, 38 RBI in 55 games.

Now I wouldn’t expect him to come up and hit .280 but if Singleton can hit around .220-.230 and draw walks with the homerun power it would give the Astros a boost. Since April 15th, White is only hitting .157 with .534 OPS. Both of Singleton’s stints in Houston he had a higher OPS. I don’t think this would close the book on White but with the Astros pushing to get back in contention, they could use a boost. That boost may just come from former top prospect, Jon Singleton.