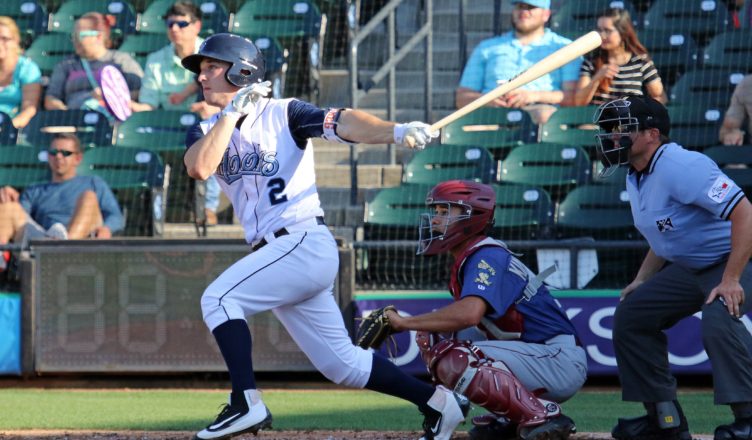 Fisher’s left handed swing is beautiful though it can get loopy at times. His swing load is textbook and his lower half shows great balance. Swinging into the zone, Fisher at times exposes himself to the pull side and as a result can get easily tied up with fastballs on the inside of the plate or start flailing at breaking pitches away. When he’s locked in, however, he keeps his hands back and is able to use his above average bat speed to drive the ball to all fields. He has loft to his swing that could generate annual 20-25 homers with better pitch recognition. Strikeouts, like with most prospects with power potential, have been an issue. He also has good speed and does a good job of getting on base.

Moran was drafted by the Marlins with the 6th overall pick in the 2013 draft and was acquired by the Astros in the trade that sent Jarred Cosart to Miami. Moran is known for his plus hit tool and developing power. He was drafted at just 20 years old and has hit for average at every stop in the minors. He is an adequate defender at third but the knock on him right now is the lack of power. Last season in AA, Moran showed the potential that many saw in him when he hit .306 with 25 2B, 9 HR, and 67 RBI. He started this season in AAA and got the call to the Astros, though he only had 19 at bats before being sent down. -JP

Son of former all star Mike Cameron, Daz slipped to the Astros with the 37th overall pick. Daz offers a similar tool set to his father, a plus plus centerfielder with a solid bat, plus speed and the ability to have average power in the big leagues.  Cameron struggled in his first assignment at low A Quad Cities, albeit this was a very aggressive assignment for the 18 year old, batting just .143/.221/.221 in 77 ABs. Cameron was sent back to extended spring training to work on his swing, he has since been sent to Class A Tri-City where he has had some success. – Rob

Remember that Jose Veras trade when everybody was so excited about Danry Vasquez and nobody cared about that other guy?  I present to you the other guy.  Paulino has quietly turned himself into one of the best prospects in one of the best systems in baseball.  He has a frame that scouts dream of in a pitcher, as he stands 6’7″ at 215 lbs.  Paulino’s fastball sits between 95-97 and he tops out at 98.  His delivery is effortless, giving him what scouts call “easy gas.”  His height gives his fastball a steep downward plane, which induces lots of grounders, something that’s paramount at Minute Maid Park. – Grayson

Not much about Forrest Whitley hasn’t already been said. He’s 6’7″, features a fastball in the high 90s, topping out in the triple digits, a power curve in the high-80s and a Changeup that frustrates hitters. He strikes out hitters at an alarming rate, having a clear advantage over his Texas high school competition. He has ace potential that could shine against his future opposition. It’ll be interesting to see how many innings the Astros will want him to throw as he pitched a large number of innings for Alamo Heights. If he continues to dominate, he could have a fast path to the Majors. Houston fans should be excited to have this guy on our side. – Johnny

Musgrove was originally drafted by the Blue Jays in the 1st round of the 2011 draft. He was acquired by the Astros in the 10 player deal with Toronto in 2012. It took Musgrove a little while to breakout but he did in a big way in 2015. Musgrove throws a mid 90s fastball and mixes a slider, changeup which are both very effective pitches. He has phenomenal control, evident by him only walking 8 batters in 100.2 innings last season. He ended 2015 with a 12-1 record, 1.88 ERA, 8 BB/99 K in 100.2 innings. He was also added to the 40 man roster this off-season. He started 2016 in AA and after dominating over 26.1 innings was promoted to AAA. He is probably the closest pitching prospect that is ready to contribute to the Astros. – JP

Francis Martes is an interesting prospect due to the fact he was basically an afterthought in the deal that brought him to the Astros. Arriving as a throw-in in the 2014 Marlins-Astros Trade, Martes went to work in the Astros’ Farm, instantly showing dominant stuff and a fastball that hits upper 90s. Still very young at just 20 years of age and still adjusting to AA, he is viewed as a potential frontline starter due to his upper 90s fastball and nasty offspeed pitches, including a curve that is one of the best currently in the Astros’ system. His control has been spotty in 2016, but has shown the consistency in the past to not be viewed as a major issue going forward. – Johnny

Kyle Tucker is viewed as the better of the two Tucker brothers, as Preston Tucker is also currently with the Astros franchise. Drafted out of High School in Florida with the 5th pick, Tucker has enjoyed immediate success in the Minor Leagues, so far putting together better than solid numbers in his time with Low A Quad Cities. Tucker is one of the Astros’ top prospects because he has a rare blend of power and speed to go along with his other solid tools, having the potential to  develop into a 5-Tool Player. He is believed to be a big piece in the Astros’ future plans, as the OF as a whole in the Minors is lacking in prospect depth and there is no long-term answer currently locking down LF or CF in Houston. – Johnny

A.J. Reed put his name on the map thanks to an unconscious 2015 that saw him make an embarrassment of minor league baseball.  He’s struggled a bit more this year as he’s dealt with injuries.  He’s been the hottest name in the Astros minor league system and could have the weight of the world on his shoulders as well.  If Reed can put together a couple of weeks of consistent at-bats then I think we’ll see him in an Astros uniform here shortly, especially with the current shortcomings at first base. – Grayson

Bregman is the consensus #1 prospect in the Astros system and one of the top prospects in all of baseball. He was drafted by the Astros with the #2 overall pick in 2015 out of LSU. Bregman is known for his quick, compact swing. He plays the game hard and the right way. He also possesses good speed and has the ability to stick at shortstop defensively. The Astros have gave him some time at third base recently due to Correa playing shortstop at the major league level. Bregman made it High-A Lancaster in his draft season, which is almost unheard of. The Astros started Bregman at AA to start the 2016 season and he has dominated so far. He appears ready to be promoted to AAA and it may happen after the Texas League All-Star game. – JP

Charlie Blackmon An Option For The Astros?