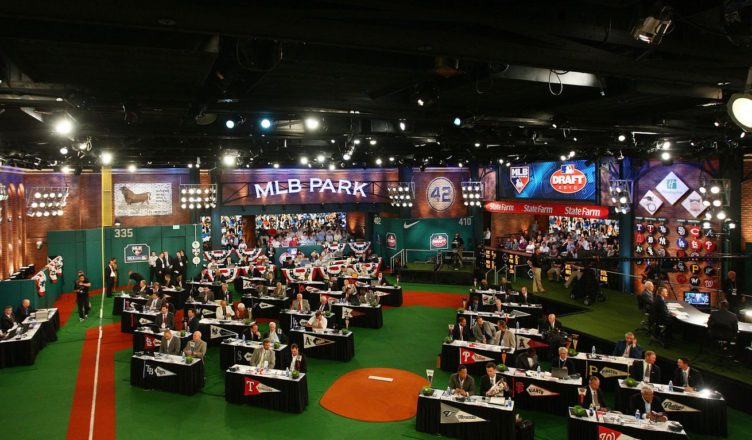 In the Modern Age of baseball, velocity appears to be everything. A pitcher capable of throwing 95 is starting to become the normal in baseball. Flame-Throwers will typically get a good look early on in the draft. In years past, prep flamethrowers have started to be selected earlier in drafts. However, the track record is not very viewer-friendly as the list doesn’t have much success to show regarding the health of the pitcher down the road. For example, one of the hardest throwing prep pitchers in recent memory is Tyler Kolek from Shepard, Texas. Throwing 102 mph coming out of High School, Kolek was drafted by the Marlins with #2 pick in 2014, but has since had Tommy John Surgery. Risk is there for a lot of teams with interest in prep arms.

Nevertheless, teams will take the risk on prep flamethrowers because they offer a chance to become great pitchers and begin their service time at a very young age. In this year’s draft, the prep flamethrower seems to be another right-handed Texan in Alamo Height’s Forrest Whitley.

Whitley is one of top High School pitchers in the country, having led Alamo Heights to the Playoffs in consecutive years, including a 4th round appearance last year. He is a bonafide fireballer with a fastball that contains good life with a lot of movement, and will wow on the gun, approaching triple digits and sitting consistently around 97 mph. His offspeed pitches are above average, possessing a power curveball that sits in the low-80s with good depth and a Changeup that drops late in the delivery, making all 3 pitches reliable and consistently deceiving.

What’s really impressive when you take a look at Whitley is back during his Freshman year, Whitley was a sub-6 footer with a fastball sitting in the mid-70s. Fast-forward just one year to his Sophomore campaign, he is now standing at 6’7″ 230lbs with a fastball now sitting in the low 90s. His arm appears to be in better shape than most prep arms at this point due to the fact he has not been throwing considerably hard for a majority of his baseball career.

Stats are hard to come by with High School players, due mostly to some schools having their stats blocked on MaxPreps. However, while you have to look around a bit, stats are available (though limited) to Whitley. As a Junior, Whitley was nearly unhittable with a 7-1 record, an EXTREMELY low 0.21 ERA, and 120 strikeouts, proving to be very overpowering at the High School level.

This season, not much is obtainable to an outsider on Whitley, though we know he was plagued with a broken left thumb during the start of this season, which could be a reason for him to fall on draft night, but shouldn’t be an issue if no issues are currently there with his thumb. Since coming back from injury, he has picked up right where he has left off. He is a big reason why Alamo Heights is still playing in the playoffs, as they are slated to play Boerne-Champion HS in the Region 4 Championship game in the next week.

The unpredictability of this year’s draft can really be seen by the projected draft spot of Whitley. Recent mock drafts have him pegged anywhere from as high as #8 to as low as #46. He could be long off the board by the time the Astros are on the clock or still on the board long after the Astros turn in their selection.

Regarding signability, where Whitley is eventually selected could go a long way to determine whether or not he ever steps foot on Florida State’s campus. There is a much greater chance he goes earlier rather than later, so signability most likely won’t be a concern.

Whitley could be a quick riser through the Minor League System as his fastball and stuff are well beyond his years. A good time table for him could be sometime in 2018, though it could take some time for him to adjust to the Minor League lifestyle, which seems to be a big issue with pitchers taken out of High School. Expect him to round out his high school career in a few days and join a minor league team shortly after the draft and ideally be shut down after July. With High School flamethrowers, since the track record isn’t viewer-friendly you can never be too careful than to make sure his arm is in good shape and ready to go in 2017.

A good player comparison for Whitley is the New York Mets’ Noah Syndergaard, as both are tall righties containing triple digit fastballs that will sit high-90s consistently. Both contain great breaking pitches to compliment their fastballs, and both are overpowering to their respective opposition.