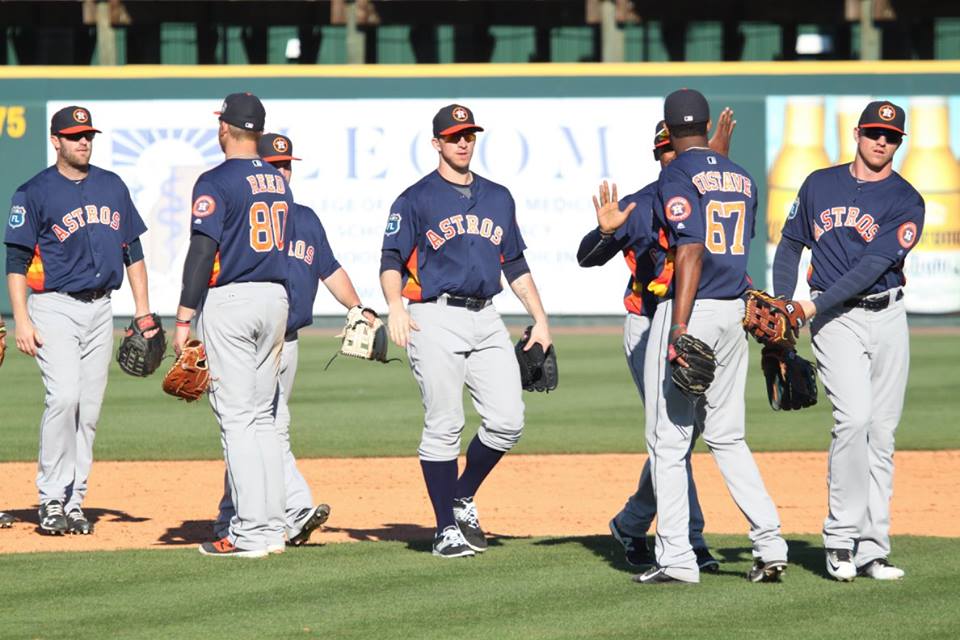 Who Will Be The Next Astros Prospect Called Up?

After the blazing hot start out of the gates to open the season in April, the Astros are sitting pretty atop the AL West standings. The starting pitchers have been phenomenal, the lineup one of the best in baseball, and the bullpen lights out led by newly acquired fireballer Ken Giles. The prospects in the Minor Leagues are most likely going to have to wait to find their place in the Big Leagues.

Whoa wait what? That’s not how it happened?

If those weren’t your expectations coming into the season, then you probably weren’t believing hard enough. And this is probably all your fault.

All jokes aside, the production from the lineup leaves much more to be desired. Some everyday players could be on their way out as soon as this month, what with all the prospects busting on the door to the club. Let’s take a look at the prospects that could find their way to the club sooner rather than later.

Colin Moran
Jeff Luhnow has always been a fan of Moran. Before being traded to the Astros shortly before the 2014 Trade Deadline, Luhnow considered drafting him with the #1 overall pick in 2013, eventually picking Mark Appel. Moran has been hitting very well in AAA Fresno with a slash line of .303/.357/.395, and he’s a safe bet to be the next prospect called up by Luhnow and the Front Office. Luhnow has even hinted that “one injury or slump and Moran could very well be up here.” Luis Valbuena is currently hitting below the Mendoza Line with a .183 BA, striking out at a 33% rate and owning a OPS+ of almost half of the league average at 54. With numbers like that, Moran could be up as early as next week.

AJ Reed
Deemed as one of the only untouchable prospects left in the system, Reed is a rare 1B talent, MLB experience or not. Experts have gone as far as to call him a Joey Votto/Paul Goldschmidt hybrid. Reed hits for a high average with high power. Reed was on the fast track to the club during Spring Training, but the belief was that due to Tyler White‘s blazing hot start it could allow Houston to delay his debut by giving him a few extra weeks of seasoning in the Minors. White has cooled down since then, and Gattis is batting an underwhelming .229, which is unlikely to improve by much since his career high is only .264. Like Moran, Reed can find himself up sooner than later, June being the ideal timetable.

Tony Kemp
Everything you need to know about Kemp can be found HERE. With Gomez being, well, Gomez, this is my long shot selection to take CF. Ideally as soon as possible, but his first shot will most likely come in 2017

Joe Musgrove
Musgrove really broke out this past year, pitching to a 12-1 record with an incredible 1.88 ERA, and only walking 8 over 100.2 innings. He’s even better this year, 2-1 with an ERA of 0.39. With the pitching struggles through the first month, Musgrove could be a simple answer to improving the rotation’s success, as just last year Luhnow proved he wasn’t afraid to promote a player multiple levels to the Majors League, having moved Lance McCullers from AA straight to the Big League Club. Musgrove could provide the spark the Astros’ rotation needs to get the wheels turning again.

David Paulino
Paulino came to the Astros in the Jose Veras trade in 2013. That’s right. The Jose Veras trade. Another win for Luhnow and the Front Office! Paulino has been a stud everywhere he has pitched, never having an ERA above 2.81 for a full season. That’s not saying much since last year was the first he has pitched more than 50 innings, but nevertheless, still very impressive. Paulino, like Musgrove, had a breakout campaign last season, but having recently had Tommy John Surgery, Paulino is the least likely on this list to make the jump from the Minors to the Majors, but it’s still something to keep an eye on.

Jandel Gustave
Out of all the names on this list, this one is the most surprising. Gustave spent the first 5 years of his minor league career being an afterthought. After being selected by the Red Sox in the Rule 5 Draft, he was traded to the Kansas City Royals where there he was placed on waivers and claimed by the Padres, who turned around and gave him back to the Astros. In 2015 though, he was masterful, pitching to a 2.15 ERA in 58 innings and proving he could be a force to be reckoned with in the bullpen. Gustave has been even better this year, completely shutting down the competition through the first month of the season. Gustave also features a triple digit fastball, something the Astros lack in the bullpen, not counting Ken Giles, who has struggled to hit the century mark in his time in Houston so far. If Gustave can continue to dominate in AAA, chances are he can find himself in the bullpen in Houston soon if the Astros continue to struggle.

Not every prospect can be counted on to come in and turn around a struggling club. That being said, changes need to be made to ensure the losing doesn’t continue. Trades can be a system killer when the asking price of other players becomes too expensive, especially when you can find a few of the answers within the system. If the struggles continue, then it may force the hand of Luhnow and the Front Office to make a change or changes sooner rather than later, and it should all start with the farm.