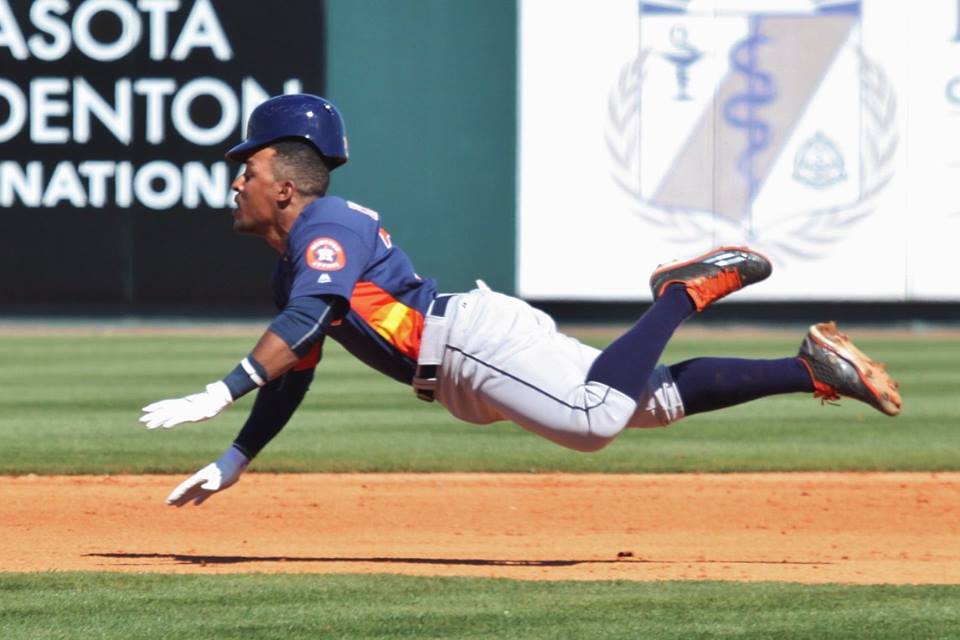 A Tale of Two Debuts for Kemp and Moran

For the second year in a row, the Houston Astros have chosen the south side of Chicago as a platform to break rookies into the major leagues.  Last year, it was Carlos Correa facing the unenviable task of making his debut against White Sox lefty, Chris Sale.  Last night, it was Tony Kemp and Colin Moran’s turn to crack the starting lineup at U.S. Cellular Field.  Facing righty Mat Latos, lefties Kemp (left field, batting ninth) and Moran (third base, batting sixth) got the starts in A.J. Hinch’s lineup.  While their debuts went in different directions, they both showed signs of why they were called up to the parent club in the Astros 5-3 win over the White Sox.

In a one game snapshot, Tony Kemp showed why he made an enticing addition to the roster for manager A.J. Hinch.  He showed off both with the glove and the bat throughout the night.  His very first taste of action came on the defensive side in the bottom of the first inning.  Leadoff hitter for the White Sox, Adam Eaton, hit a clean line drive down the left field line which Kemp had no chance of making a play on as he was shifted a little towards center.  Despite the alignment, Kemp was able to make a great play to run down the single and made a phenomenal throw to second base to nail Eaton, who was trying to stretch it into a double, by several steps.

On the offensive side is where I was most impressed with Kemp, though.  From the second that he first stepped in the box, he showed a calmness unlike most rookies in his position.  Throughout the night he was willing to take pitches and go with what the pitcher gave him.  As a result, after two at bats, he already had his first major league double and single.  On both pitches, he went with the outside location and wore out the left field line with line drives.  In his third at bat, he grounded out to the shortstop, but put on display the speed that will certainly make him a viable pinch running threat when not starting.  Lastly, in his fourth at bat, he once again showed a keen eye by working a walk (which unfortunately was eventually erased by the White Sox 5-4-3 triple play).

Colin Moran, on the other hand, had a much less impressive debut than Kemp did.  On the defensive side, Moran only had one opportunity to show his glove, but it did not turn out well for the Astros.  In the bottom of the sixth, Todd Frazier put down a bunt towards the third baseman.  Moran seemed to react a little slowly which led to a rushed and seemingly awkward throw after barehanding the dribbler.  The throw pulled Valbuena towards the runner which led to a minor collision and allowed the ball to go to the wall, although there was no advancement by Frazier.  Moran was not credited with an error, but that is a play that he will need to be able to make if he wants to be a big league third baseman.

On the offensive side, it was very evident that nerves got the best of Moran early on.  In his first at bat, Moran seemed very anxious and chased a couple bad pitches, ultimately striking out.  In his second and third at bats he weakly grounded out to second and lined out to short, respectively.  In his fourth at bat, though, he finally started to settle down and worked a walk, not chasing pitches that he seemed to earlier in the night.

There was one other observation that I had of Moran on the offensive side that has just seemed to stick with me.  In his second at bat, Moran hit a liner down the left field line.  Initially anticipating it was going to be foul, he seemed to take a couple steps simply walking out of the box.  It wasn’t until he realized that it was actually going to be close that he started to pick up speed.  And close it was!  In fact, it was so close to being fair that there was a momentary pause to the game as Hinch decided whether to challenge the ruling or not.  I only make the observation about the initial break out of the box because, had that been fair, that might have been the difference between a single or a double.

It is way too small of a sample size to predict the careers of Tony Kemp and Colin Moran based off of one single game, especially one where nerves and adrenaline were likely at a high, but there are definitely takeaways.  Kemp seems like the type of hitter that is not afraid to see lots of pitches and can consistently put the ball in play (something the Astros have sorely lacked at times, especially with runners in scoring position).  If not starting, those attributes make Kemp a very good option as a pinch hitter late in the game.  As for Moran, while he struggled early, I was impressed with how he eventually settled down in his last at bat, showing more patience and discipline.  As he relaxes and gets more opportunities in the box, Moran’s track record of decent average and line drive power should start to come forward (if not, he may have to deal with Alex Bregman breathing down his neck as he gets more starts at third in the minors).

Other Notes From The Parent Club