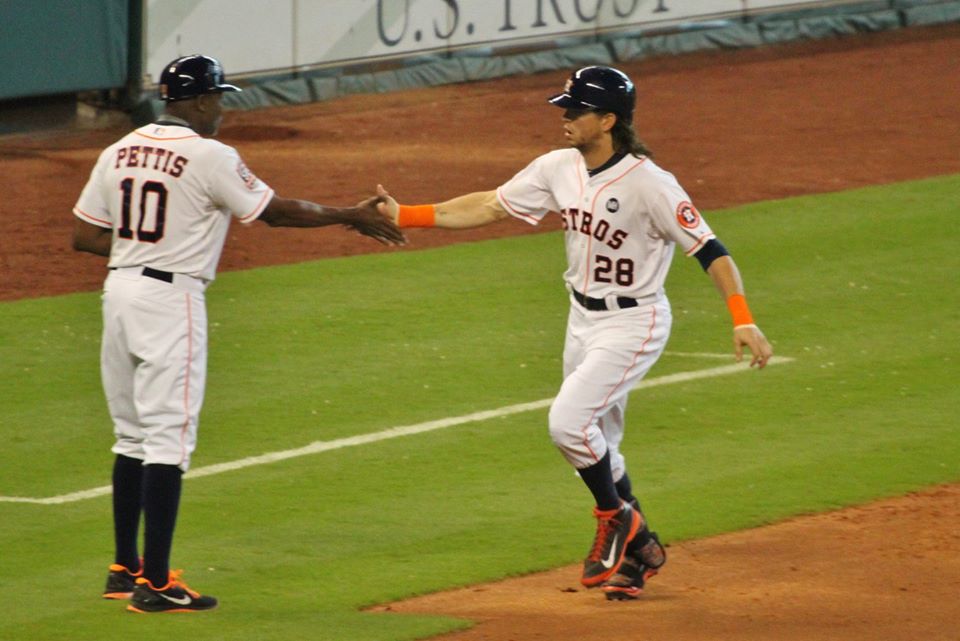 If Astros Continue Slow Start, Some May Find Themselves On New Teams

First and foremost, we aren’t panicking…..yet. The Houston Astros have not even played a third of their total games yet and have played better as of late. They just finished a three game sweep of the Baltimore Orioles where they set a MLB record for most strikeouts by a pitching staff in a three game series (52). The goal is for them to start having some consistency from series to series and to claw there way back into the division race. They have put themselves in a tough position, the Astros sit at 20-28, tied for last with the Oakland Athletics at nine games back in the AL West; however, they have the talent to make a run at it. Despite this, last week, Ken Rosenthal of Fox Sports discussed how the Astros might become a very interesting seller if they can’t bounce back from their slow start, trying to recoup some of the prospects that they have lost in recent trades for players like Ken Giles and Carlos Gomez.

While AstrosFuture.com generally focuses on the future players that may assist the Houston Astros, today I am going to look at some of the players currently on the big league squad that may end up being traded if they can’t right the ship. At this point, it is impossible to determine what we might be able to get back in return for them as that is all based on supply and demand. Due to quality of player and lengths of contract, none of these players are going to bring back blue chip prospects. That is not to say that some of these players couldn’t bring back a nice return, though.

Also, understand that there may be other players that the Astros could move depending on the situation. I am mostly focusing on players who have either fallen out of grace with the Astros or are approaching the end of their contracts.

The first, and possibly most valuable player the Astros might move, could be Colby Rasmus (yes, players like Altuve, Springer and Correa are more valuable, but not going to be moved). Rasmus has been a gem that Jeff Luhnow found on the free agent market two off seasons ago.   Not only has he been solid on the field, his personality has fit in great with the Houston Astros and their clubhouse. Signed, initially, for eight million dollars, Rasmus earned his money last year by hitting 25 bombs during the regular season and then continuing his hot play in the postseason. Rasmus became the first player in MLB history to accept a qualify offer last offseason, coming back to the Astros on a one year deal. Colby Rasmus would be a welcomed addition by a lot of clubs. He can play all three outfield positions and has good pop from the left side. Some teams that come to mind that might have interest include the Royals and Indians, among others.

Jason Castro is an example of a catcher with a great glove behind the plate, especially with his ability to call a game and his pitch framing, but his bat has not come along like the Astros had hoped. It looks like he may also want more then the Astros are willing to pay to resign him, especially with the weak bat.   The biggest issue for the Astros is a lack of options to replace Castro if he were to be traded. Evan Gattis has been serving as the backup catcher and has gotten rave reviews from Colin McHugh, but I don’t think anyone looks at him as a permanent replacement. Max Stassi could also be seen as a replacement, but has battled injuries early in the season and hasn’t exactly been tearing it up since. If the Astros do decide to move him, a team like the New York Mets, who have been frustrated with Kevin Plawecki’s development and are unsure of Travis d’Arnoud’s recovery, may be interested. The Chicago White Sox are another team that comes to mind as a potential suitor.

Luis Valbuena came to the Astros in a win-win trade when he and Dan Straily came from the Chicago Cubs in exchange for Dexter Fowler. Valbuena and his 25 homeruns were a big part of the magical season last year, but he has struggled to regain the form this year, which has prompted the Astros to use Valbuena in platoon roles at first and third with Colin Moran and Tyler White. The Astros also have plenty of options at the corners in the minors with players like Alex Bregman and A.J. Reed knocking on the door. This makes Valbuena very expendable, even if the Astros get back in the race. With the loss of Mike Moustakous, the Royals could definitely be a fit. The same could be said for the Mets with the loss of Lucas Duda.

I think it was very smart of Jeff Luhnow to develop Gattis back into a catching role. Realistically, from a designated hitter, his offensive output leaves something to be desired, but from the catching position, his numbers are much more tolerable. Now, as mentioned earlier, I am not sure he can be seen as a full time catcher, but any team with the need for catching help and some power from the right side might be interested. Gattis has also hit better since being promoted back to the big club, only helping any possible trade value. I do think he is ideally suited for an American league team, where he can get at bats as a designated hitter, but a team like the Mets, who could use him occasionally at catcher (and possibly even first) may have interest. In the AL, a team like the White Sox may have interest, too.

Unfortunately, the Houston Astros didn’t quite get out of Neshek what they paid for after his remarkable season with the Cardinals where pitched to a 1.87 ERA. That is not to say that Neshek has been a bad pitcher for the Astros, though. Last year, he pitched well out of the pen, being the primary setup man accumulating 28 holds. This year, he has fallen down the pecking order a little as Harris and Giles have taken over the setup role for Luke Gregorson. Regardless, Neshek may be in demand given his unorthodox pitching style that is particularly tough on righties (righties are batting .061 versus him as opposed to lefties who are batting .333). Neshek could find his name on the wish list of a lot of teams, especially if there aren’t a ton of other options in the setup department.

Doug Fister signed this offseason with the Astros for one year at seven million dollars. It was a solid deal for both sides. For the Astros, they got a pitcher who had a history of being successful under market value while Fister got a team where he hoped to be able to rebuild some of his value while being on a competitive team. Fister, for the most part, has lived up to his end of the bargain. Fister was never going to be seen as a top three starter, but he does make for a very quality four or five on a team’s rotation. Those type of pitchers can have value at the trade deadline. Fister definitely pitches to contact, as he does not have overpowering stuff. With that in mind, any team looking for pitching could enjoy his services. I will say, it is hard to pinpoint a specific team as often times injuries lead to trades for players like Fister. I could maybe see a team like the Red Sox having interest, who have a great offense but lack in the pitching department, but also wouldn’t be surprised if they set their sights higher.

Scott Feldman is in the last year of a three year, thirty million dollar contract with the Astros and may also be a prime candidate to be moved. Feldman lost his role in the rotation earlier in the season but has done pretty well out of the bullpen. He has actually seen an uptick in his fastball velocity and teams may value his ability to throw a few innings, or possibly even make a spot start, when needed. Like Fister, it is hard to analyze who might be interested in him at this point, but generally pitching is almost always in demand when approaching the postseason.

To say that Gomez has not panned out the way that Luhnow and company had hoped would be a huge understatement. At this point the Mets are probably counting their blessings that they nixed their deal and went with Cespedes instead. I have heard lots of Astros fans saying that they want him shipped out immediately, but I hate to tell you, at this point, no one is going to take him. Really, what Astros fans need to hope for is that this DL stint rights the ship with him a little bit and he can come back up to the parent club and start playing like the player that we gave up Brett Phillips, Domingo Santana, Adrian Houser and Josh Hader for (in addition to getting Mike Fiers and an international signing bonus slot). If he does, it may actually help the Astros get back into this race. If not, he might actually be a candidate to be traded in August, as he would likely pass through waivers unclaimed.