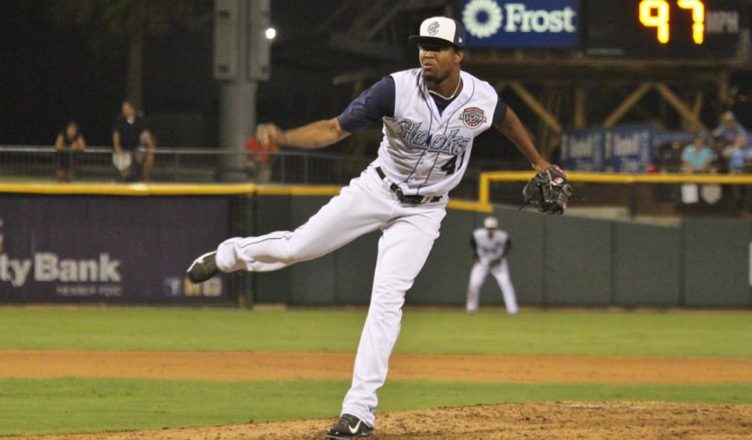 The Astros have assembled a plethora of talent all throughout their minor league system and that potential does not run dry with the arms bring groomed in the farm’s bullpens. The Astros have a handful of guys who are throwing in the mid to high 90s and even hitting 100 MPH. Let’s take a look at a few guys who could be potential bullpen pieces in the near future.

I was lucky enough to witness Jandel Gustave display his arm strength in person and the power behind this guy’s fastball was reason to believe he could make a living in the MLB. That day, Gustave’s fastball didn’t drop below 97 and was consistently hitting 100 and 101 MPH. Gustave has been with the Astros since 2010 but really started breaking onto the scene in 2014. Last season, as the closer for the Hooks, he had a 2.15 ERA but only struck out 49 in 58.2 IP while walking 25. He had a good spring and is now in AAA where he has 1 BB/8 K in 8.2 IP. He is on the 40 man roster so if there is an injury in the Astros bullpen, he has a good chance to get the call.

Guduan is a big, raw, flame throwing left hander. Like Gustave, he has been in the Astros system since 2010. The talent has been there but he has struggled to put it together. In 2015 he pitched at three different levels doing very well with QC and Lancaster but struggled with Corpus with a 11.57 ERA and 19 BB in 16 IP. He has turned it around though to start 2016. In six appearances he has gone 11 IP, 6 H, 0 R, 3 BB, 15 K for Corpus. Guduan can get up to mid 90s with ease and can hit 100 MPH.

Hoyt was acquired in the deal that brought Evan Gattis to Houston. Hoyt is an older prospect at 29 y/o but was playing independent ball up until 2013. Hoyt runs in up to the mid 90s to go with his slider. Since joining the Astros organization he has had a ton of success. In 2015 posted a 3.49 ERA in AAA but the peripherals were great (2.0 BB/9, 12.1 K/9). Hoyt had a great winter league followed up with a solid spring. So far this season Hoyt has a 1.74 ERA with 18 K in 10.1 IP. He is another guy who could be up this season.

Having a dependable bullpen will only reinforce the security of the starters and the Astros have the potential to have a dominant bullpen in a couple of years. You can read the names now, but they will be pitching in MMP in the near future.