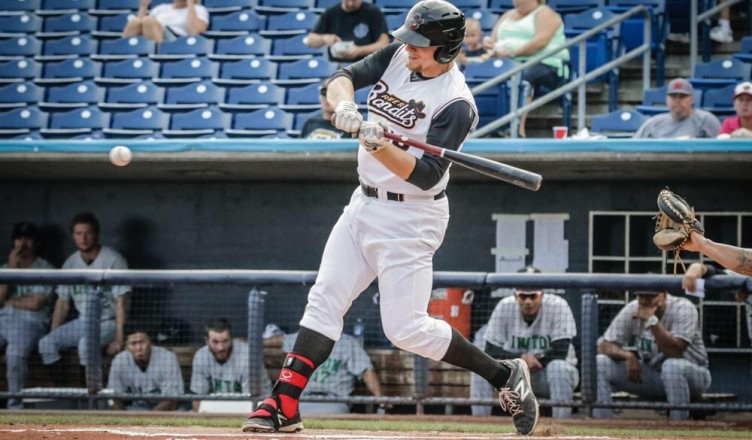 Going into the 2014 MLB draft the Houston Astros had the number one overall pick in the draft which came with the number one pick in the second round too. With this second round pick the Houston Astros selected Andrew Joseph “AJ” Reed from the University of Kentucky. Reed was an exceptional hitter and pitcher and was drafted by the New York Mets out of high school. He chose to not sign, instead attending the University of Kentucky.

While at Kentucky, Reed was considered one of the best two-way players in college baseball. During his college career on the mound he totaled a 19-13 record with a 2.83 ERA in 248 innings pitched. Where he really stood though out was at the plate. During his junior year he hit .336 with a .735 OPS and led the nation in homeruns with 23. He won multiple awards to include Golden Spikes Award (Amateur Baseball Best Player), Dick Howser Trophey (College Baseball’s Best Player), SEC Player of The Year, and many more.

When the MLB draft came around Reed was considered one of the best power hitters available. The Astros selected Reed with the 42nd overall pick. After signing, Reed was assigned to short season Tri-City Valleycats where he played in 34 games. He was then promoted to class Low A Quad Cities where he finished the season playing 34 games for the River Bandits. Lets get to the interview!

AJ was kind enough to take some of his free time to answer a few questions for us.

Astros Future (AF): Can you describe the feeling of being drafted by the Houston Astros? What was that day like for you and your family?

AJ Reed (AJ): “Being drafted by the Astros was such an honor for myself and my family. I felt like it couldn’t be a better fit for myself and the organization. We had a nice little party at my girlfriends parents with all my family and closest friends and waited. Once it happened we all exploded with happiness.”

AF: Did you have any prior knowledge that the Astros had interest in drafting you?

AJ: “I had talked to the Astros briefly in the fall and right before the season and we knew they were a good option.”

AF: What is your favorite songs to listen to prior to a game?

AJ: “I don’t really have any specific songs I listen to before games. I just really enjoy talking with the guys and being loose.”

AF: What superstitions, if any, do you have pre-game or during game?

AJ: “The only superstition I have is I get a drink of water before every at bat, before I go on deck.”

AJ: “When I was younger and a couple years of high school I was a bowler and I think if I had never played baseball I would have had a career in bowling.”

AF: During your collegiate career at Kentucky you were also a pitcher for the Wildcats. Now that pro ball has started you are playing primarily first base. Do you miss the pitching aspect of your game?

AJ: “The Astros told me I would be playing first base only. I will not be pitching anymore. I will miss pitching because I’ve done it my whole life but I’m excited to focus on just one aspect of the game.”

AF: What is the most memorable moment of your professional baseball career?

AJ: “My most memorable moment of pro ball so far was getting called up from short season to Low A and meeting up with the team in Bowling Green, Kentucky where some fans from UK, where I went to school, came to watch and I hit a home run in my first game with the River Bandits.”

AJ: “The biggest adjustment for me was finding a good model of bat that I liked. I was comfortable early but once I found it I really felt better and relaxed at the plate.”

AF: Can you describe your hitting style?

AJ: “My hitting style is swing hard and hit if far. Until I get two strikes of course then I’m looking to protect the plate and put a good swing on a mistake. I like to use the whole field and be a complete hitter and not just a home run hitter.”

AF: If there was anything you would like to improve on the field, what would it be? What do you feel is your biggest strength?

AJ: “The thing I want to improve on the most is my defense. I want to not only be a great hitter but a great defender as well. My greatest strength is making adjustments to pitchers.”

AF: What’s the most intriguing aspect of baseball, the game you love, that still boggles your mind to this day??

AJ: “The most intriguing part of baseball for me is that just like any sport anybody can win or lose on any given day. For pro ball unlike any other sport we get to play the next day and forget about the day before.”

AJ: “My goals in 2015 are to be at the core of the organization and move up as quickly as I can. Also produce to the best of my ability.”

AF: Once again, thank you very much. Enjoy your off season and I can’t wait to see what you have in store for next season.